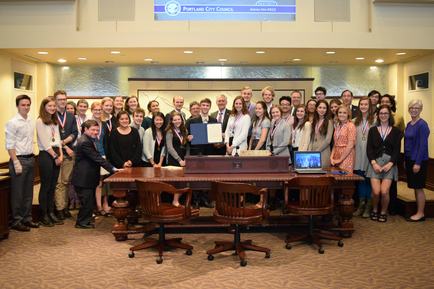 This morning, City Council proudly welcomed the Grant High School Constitution Team, winners of the 2015 National We the People competition in Washington, D.C.!

Nick was honored to read a Proclamation to celebrate their victory.

The We the People competition, designed to simulate congressional hearings, teaches students about the United States Constitution and Bill of Rights.

The Classroom Law Project has administered Oregon’s We the People competition since 1987. Nick has been proud to serve as a judge for the regional competition for the past six years.

2015 marks the fourth year in a row that a Portland Public School team has brought home the gold. Oregon boasts more national titles than any other state in the country!

Grant High Principal Carol Campbell, Constitution Teacher Jeremy Reinholt, and Classroom Law Project Program Director Barbara Rost praised the students’ work. Two students, Cassie Hill and Amelia Morrison, shared how the program has made a difference in their education – and even in their future career goals.

Congratulations to the Generals for their incredible achievement!