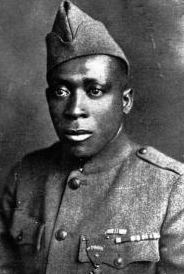 Nearly a century after his service to our country in World War I, Sergeant Henry Johnson will finally be awarded this nation’s highest military honor.

On June 2, at the White House, President Obama will posthumously award Sgt. Johnson the Medal of Honor for his courageous actions during World War I.

Nick is honored to be invited to the ceremony, and will join an Oregon delegation including The Skanner publisher Bernie Foster and Nick’s former public advocate, George Hocker, at the White House on Tuesday.

Sgt. Johnson served in the 369th Regiment, also known as the Harlem Hellfighters. The African American regiment fought under the French flag, a legacy of segregation in the Army during WWI.

Nick’s grandfather, Hamilton Fish, was a Captain in the regiment.

In 1918, a wounded Sgt. Johnson fought off a German raider party for an hour – with only his jammed rifle and a bolo knife. His actions saved the lives of other soldiers. Sgt. Johnson was the first American soldier to receive France’s highest military honor, the Croix de Guerre with Palm.

Since 2010, Nick has been working with Senator Ron Wyden and The Skanner newspaper to right this wrong, and to secure the Medal of Honor for the WWI hero.

Medal of Honor at Last for Black WWI Veteran

Jacob Siegel in The Daily Beast