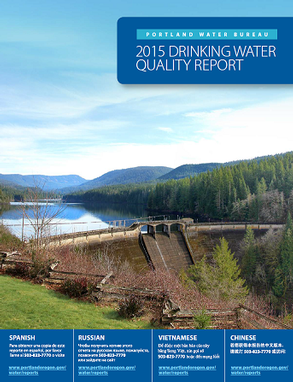 For more than a century, the Portland Water Bureau has been providing safe, clean, and reliable drinking water to nearly one million Oregonians. And thanks to our visionary Bull Run Watershed system, Portland boasts some of the best-tasting drinking water in the world.

As stewards of our great water system, the bureau is proud to release its 2015 Drinking Water Quality Report.

The federally-required report explains our system in detail, including a system map, notes about water treatment, and quality measurements like turbidity, naturally-occurring elements in our water, and more.

At a time when other areas of the west coast are facing major droughts, Portland not only has an abundance of water in the Bull Run – it’s water that meets all public health standards!

Commissioner Fish is proud to serve as Commissioner in charge of your Water Bureau – delivering quality drinking water, from forest to faucet.

Check out the report online. It’s also available in a larger font for the visually-impaired and in languages other than English.

What's in your water? Read Portland report and browse our new database