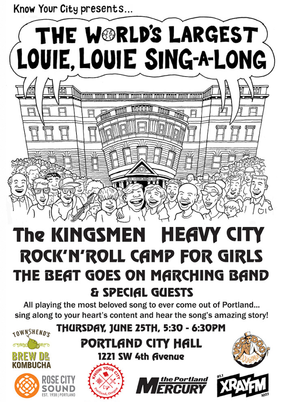 Are you ready to sing along – and be part of a Guinness World Record?

Louie Louie is a world-famous rock ‘n’ roll song, best known for the 1963 hit version by The Kingsmen. Not everyone knows that this famous rendition was recorded right here in Portland! Louie Louie is the most popular recording ever to come out of the city of Portland.

The song became an international hit – it even prompted an FBI investigation to make sure there were no profane lyrics hidden in the hard-to-decipher song.

Join us on Thursday to sing Louie Louie all together. A Guinness World Record representative will be on hand to count all the singers.

The event will feature great musical acts, including The Kingsmen, the Rock ‘n’ Roll Camp for Girls Band, Heavy City, and The Beat Goes On Marching Band. An official proclamation declaring June 25 as “Celebrate Louie Louie Day” will also be read.

Come hungry! Voodoo Doughnuts will be dishing up their new Blouie Louie doughnuts, made especially for the event, and Brew Dr. Kombucha will be handing out beverages.

Know Your City is a local non-profit dedicated to providing programs that engage the public in arts and social justice. This event is a fundraiser for the non-profit, and is part of their Sing-A-Song of Portland walking tour. The tours take visitors through a journey of Portland’s musical past.

Check out Know Your City’s website for more information about this event.