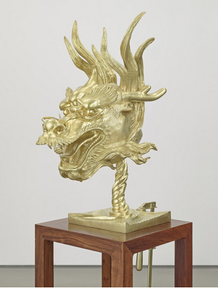 The Portland Art Museum has a wonderful new installation covered in gold.

The originals were designed in the 18th century by European Jesuits who served on the court of Emperor Qianlong in Beijing. The heads functioned as a water-clock fountain, and adorned an incredible imperial palace.

In 1860, the palace was ransacked by British and French troops, and the heads were stolen. Today, five have been returned to China, while ownership of several others have been contested.

Weiwei’s installation engages issues faced by the original heads, including looting artworks, repatriation, and the importance of cultural heritage.

Circle of Animals/Zodiac Heads: Gold is up through September 13.