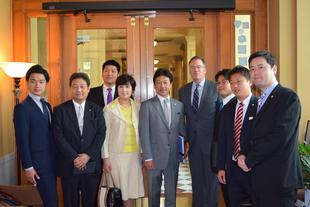 Today, Nick was proud to meet with Hiroshi Furusawa, the Consul General of Japan, and a delegation of elected officials from Osaka Prefecture, Japan.

Osaka is the second largest city in Japan, second only to Tokyo. It’s famous for dragon boat racing (like Portland!), octopus dumplings called takoyaki, and its warm, friendly people.

The delegation is here to foster a meaningful connection with Portland, learn more about our commission style of government, and take in Portland’s innovative culture.

Portland has had a long-standing relationship with Japan. Sapporo is our oldest sister-city, since 1959.  Influences of Portland’s friendship with Japan can be seen and felt around the city. We have the beautiful and serene Portland Japanese Gardens in Southwest. There is also the Japanese American Historical Plaza and Bill of Rights Memorial at Tom McCall Park, which is surrounded by incredible Japanese cherry blossoms.

We are thankful for our friendship with Japan, and hope it continues to grow.

Check out the City’s International Relations' website to learn more about our sister-cities.