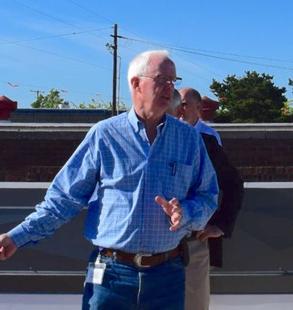 City Commissioner Nick Fish announced today his appointment of Michael Stuhr as the new Director of the Portland Water Bureau.

“I am delighted that Mike Stuhr accepted my offer to lead the Portland Water Bureau,” said Commissioner Fish. “He has extensive experience with Portland’s unique water system and has an outstanding track record as the bureau’s Chief Engineer. I believe Mike is the right leader to continue the bureau’s proud tradition of delivering high-quality, reliable, and safe drinking water to nearly 1 million Oregonians, from forest to faucet.”

Stuhr previously served for ten years as the Water Bureau’s Chief Engineer. In that role he successfully delivered major capital projects on time and on budget, including the new Interstate Operations and Maintenance Center and the Dam 2 Towers project in the Bull Run Watershed. He also served as Co-Chair of the Water and Waste Water Task Group for the Oregon Resilience Plan, a 50-year seismic resilience plan to guide policy and investments statewide.

Stuhr holds a B.S. from the United States Military Academy at West Point, an M.B.A. from the University of California at Davis, and a Master of Science in Civil Engineering from Stanford University.

“I am honored to be chosen by Commissioner Fish to serve as Director of the Portland Water Bureau,” said Stuhr. “I look forward to working with Commissioner Fish and the City Council on our shared priorities: stabilizing rates, providing strong oversight on major capital projects, improving our customers’ experience, and ensuring that we have a resilient and safe water system for generations to come.”