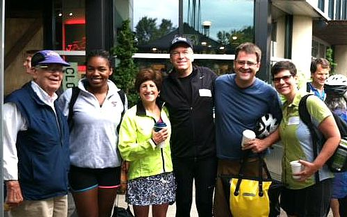 I have a new-found respect for bicyclists in the city of Portland. This past weekend, I experienced the city through a cyclist’s perspective for the first time. It was a great learning experience, not only as a frequent driver, but also as a potential cyclist myself. I learned the basic rules of the road as well as how difficult it is to bike uphill on Broadway Street when none of the traffic lights are in your favor.

I did not travel the 20 mile journey alone. In fact, I accompanied the Commissioner to the annual Cycle Oregon Policymakers Bike Ride. Around 100 other policymakers attended the event, including former mayor Bud Clark and current mayor Charlie Hales. I enjoyed the purposeful mission behind the bike ride. Policymakers often work on projects directly affecting different parts of the city, and don’t always get to see the finished product in person. This bike ride bridged that gap between the community and the office.

One of the most unexpected and most rewarding parts of the entire event was the one-on-one conversations that I had with different policymakers. I learned a lot about each person’s specific role in a project. It was cool to see all of the various moving parts come together for such a great event like this!