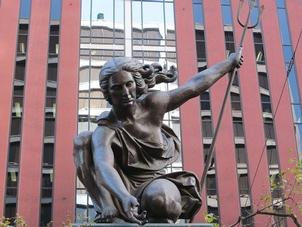 On Thursday, October 8, join Nick and the Regional Arts & Culture Council in celebrating a big milestone in our community: Portlandia’s 30th birthday!

30 years ago, Mayor Bud Clark and 10,000 fellow Portlanders welcomed Portlandia to the City of Roses as she arrived by barge on the Willamette River. The 6.5 ton statue was created by renowned artist Raymond Kaskey, who also made the World War II Memorial in Washington DC.

Portlandia is one of the largest copper statues in the country – second only to the Statue of Liberty. It was inspired by Portland’s city seal, and paid for by our Percent for Art program, which celebrates its 35th birthday this year. Portlandia remains one the most iconic symbols of our city.

Our Portland City Council will be joined by former Mayor Bud Clark, former Commissioner Mike Lindberg, and other special guests. The great Storm Large and students from Chapman Elementary School will lead us in singing “Happy Birthday” to our copper goddess.

Join us at the Standard Insurance Plaza across from Portlandia, from 12 – 1:30 pm. Special thanks to The Standard, Cupcake Jones, and Starbucks for sponsoring the event.

Quiz: How well do you know the Portlandia statue on her 30th birthday? (PHOTOS)

Joseph Rose in The Oregonian

Kevin Trevellyan in the Portland Tribune