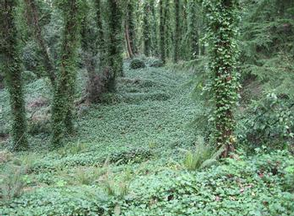 This Saturday, join your friends and neighbors in a community-wide ivy take-down at the 12th annual No Ivy Day!

English ivy and Irish ivy were once used in landscaping in Oregon. While beautiful, they are invasive species that spread quickly, and have taken over our roadways, parks, and natural areas - including in Forest Park and the River View Natural Area. Invasive ivy suffocates plants and trees, which can lead to unstable hillsides and erosion that pollutes our streams. Ivy also doesn’t help soak up rain like our native plants, so there is more stormwater runoff heading to our waterways.

No Ivy Day is hosted by the No Ivy League, a program of Portland Parks & Recreation. Since 1994, volunteers with No Ivy League have saved tens of thousands of trees, and have cleared millions of square feet of ivy from our forest floors. No Ivy League volunteers remove invasive species by hand, rather than by chemical or mechanical removal.

There are over a dozen No Ivy Day sites around the city. Check out Portland Parks & Recreation’s website for a site near you and to RSVP.