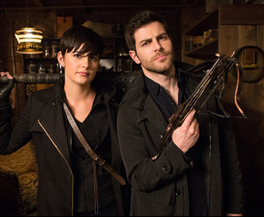 The cast and crew of Grimm and NBC and Universal Television will achieve a remarkable milestone: shooting their 100th episode in Portland today!

Grimm is filmed throughout Portland, supporting our local economy and helping put Portland on the map for film and TV productions.

As Arts Commissioner, Nick supports film and TV productions that contribute to Portland’s thriving creative economy. Since 2007, the Portland metropolitan area has seen a 24% increase in film and TV production jobs – thanks to producers from projects like Grimm, The Librarians, Leverage, Wild, and many others who are committed to hiring our local talent.