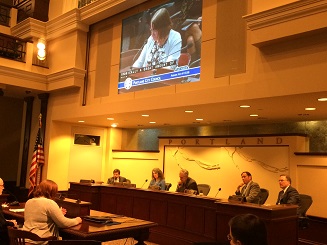 Nick’s proposal will ensure that the City’s single-user restroom facilities are accessible to everyone. Today, City restrooms are designated for use by either men or women. This leaves parents with children, older adults with attendants, and transgender individuals with limited options. Today’s resolution directs that within six months signs at those restrooms be updated to reflect that all users are welcome.

Special thanks to Multnomah County Chair Deborah Kafoury for joining us and lending her support to this proposal.

This simple but meaningful change sends a clear signal that the City Council believes City facilities should be inclusive and welcoming to all.