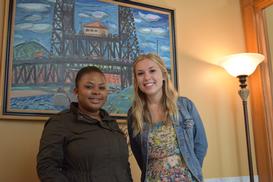 Join us in welcoming our two summer interns, Anna Oliver-Steinberg and Joyce Seraya, to the Fish Team!

Anna and Joyce are interns for the summer of 2016, assisting with constituent services, the Commissioner’s website and social media, along with other office support and projects.

Anna was born in Boston, Massachusetts, but moved to Portland with her family shortly after starting school. She is the oldest of two siblings and the proud owner of a large Goldendoodle.

Anna is currently a student in the Robert D. Clarke Honors College at the University of Oregon, and is pursuing a double major in Psychology and Public Policy, Planning and Management. Anna is involved in multiple things on the UO campus, including University Catering, life guarding at the Rec center, a research assistant for the Stress, Neurobiology, and Prevention psychology lab, and art tutoring at a local juvenile detention facility in Eugene. In her free time, Anna enjoys attending Ducks sporting events and exploring the numerous hikes around Eugene.

Joyce is originally from the Democratic Republic of the Congo, and is fluent in four different languages: Swahili, Lingala, Nyanja and English. At the age of nine, Joyce and her entire family (she has four brothers and three sisters) moved to Portland.

Joyce graduated from Roosevelt High School in 2015. She is currently obtaining her Bachelor’s degree in Communications at Portland State University. When not in school or working at a local store, Joyce likes going to different events and festivals in the Portland area. She also enjoys playing soccer.