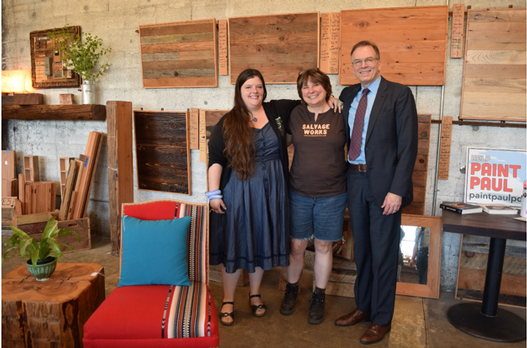 On Thursday, Nick toured three small businesses in the Kenton Business District. He was joined by Heather Hoell and Brad Forkner of Venture Portland.

First, he stopped to check on the construction of Integrate Architecture’s new office North Denver Avenue. Integrate owners Michelle Wood (Venture Portland’s new President) and her husband Phil Sydnor and their five employees are moving into their very first brick-and-mortar location after operating out of their home for the past several years. They’re in the process of renovating their new office space, which is located in a 100-year old former grocery store in the heart of Kenton.

Next, he visited Kenton Antiques, owned and operated by Maureen Bachmann, who also serves as President of the Kenton Business Association.

And finally, Nick met with Salvage Works co-owner Rachel Browning, where he got a tour of their showroom, their furniture building workshop, and their inventory of salvaged wood. Expect to see big things from Salvage Works as the City’s new deconstruction policy goes into effect later this fall.

Nick also learned of the neighborhood’s effort to restore the famous Kenton Paul Bunyan statue. If you’re interested in contributing, head to http://paintpaulpdx.org/ and donate! #paintpaulpdx

These are three stellar examples of neighborhood small businesses investing in their community.