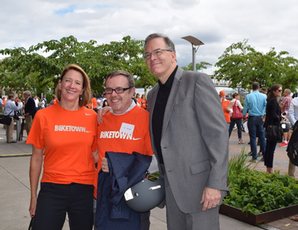 He joined NIKE, Commissioner Novick, Portland Bureau of Transportation (PBOT), Director Leah Treat, Mayor Hales, and Congressman Blumenauer at the OHSU campus in the South Waterfront for the official unlocking of the first BIKETOWN bikes.

To commemorate Portland’s new and innovative transportation system, Nick and many others geared up and crossed the Trillium Crossing Bridge on the new bikes.

Nick was proud to support the creation of a bike share program in Portland when the proposal came to Council in 2015. And he was very excited to see NIKE step up to sponsor the program — public – private partnerships are the cornerstone of many successful City initiatives.

The program operator is Motivate, which has made 1,000 bikes available at 100 stations across downtown and select neighborhoods.