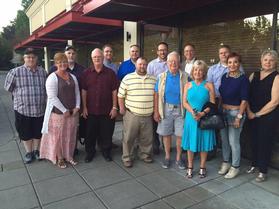 Last week, Nick had a great time attending a dinner with the City of Hermiston.

He was joined by Portland’s former Mayor, Bud Clarke, Hermiston Mayor David Drotzmann and representatives from the Hermiston City Council.

The dinner marks the continuation of a tradition started in the 1980s by Mayor Bud Clarke. It has been a wonderful event that has continued to strengthen the friendship between Portland and Hermiston.

Their dinner preceded the annual Portland-Hermiston watermelon seed spitting contest, which was held last Friday at Pioneer Square. The City of Hermiston and Hermiston Chamber of Commerce brought over 7,000 pounds of fresh watermelon for the festivities!

Visit the City of Hermiston’s website to learn more about the Eastern Oregon city.