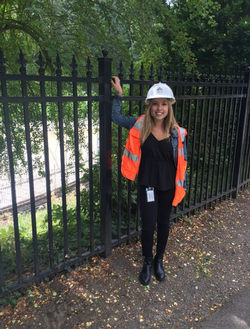 It is now the last week of my internship and my time in the Fish office is coming to an end (for now). I will be heading back to Eugene in a couple days for my junior year at the University of Oregon and want to recap the experience.

One of my favorite memories from the internship was attending the launch of BIKETOWN with Nick and Asena. It was so cool to see Nick in his zone – talking to friends, other politicians, and people who had key roles in the city and community. I was charged with being the cameraman for the event. This was fun. I followed Nick and snapped photos of handshakes and silly poses on the new orange bikes. Beyond the fun, though, it was exciting; it allowed me to see the finished product of a project that was born out of policymakers all contributing to an end goal—1,000 bikes for Portland’s first bike share program.

One of my chief tasks for Nick’s office was to write blog posts; I kept the city apprised of Nick and his staff’s activities. I was also given the tasks of writing memos, doing research on myriad policy issues in the city, creating a database of contact information for people in the arts community, as well as helping with constituent concerns, and other office tasks.

For the past weeks, I have been lucky enough to help out with the groundbreaking ceremony for the Reservoir Improvement Project at Washington Park. I assisted Liam and the awesome people from the Water Bureau plan for the event, and even joined them in scouting out locations at the park for the ceremony. It was fun seeing the planning unfold and experiencing all the preparation that goes into a big public event such as this one.

Furthermore, the people I met during my internship have changed my perspective. A Commissioner’s office is a place where things get done. People from all walks of life come in seeking input into our city and the policy decisions through which change is implemented. I was often at the front office and had the job of “gate keeper.” With each new person who came in, I experienced a different side of Portland and a new outlook.

From this internship, I have taken away a new sense of what it means to be a citizen of Portland. I have learned about the key issues facing our city and the people and organizations that make up our population. I have acquired new skills and ideas that will follow me through college and life beyond.

I will not forget my time at City Hall, and appreciate Nick and the entire staff so much for the opportunity to be part of our local government!