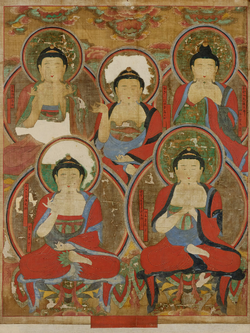 On Friday, Nick had the honor of speaking at the Portland Art Museum’s repatriation event for the Five Buddhas, a beautiful South Korean painting with an unusual history.

The Five Buddhas was originally displayed in Songgwangsa, a famous Zen temple in the mountains of southwestern Korea. In the early 1970’s, Robert Mattielli, an Oregonian and avid art collector who lived in Seoul for many years, purchased the painting from a small shop for ten dollars. It had been tossed in a corner and heavily damaged.

The Mattiellis repaired the painting and donated it to the Portland Art Museum in 2014. Around the same time, visiting scholars from the Korean National Research Institute for Cultural Heritage had an opportunity to examine the painting. Several months later, the Institute for Cultural Heritage determined that the Five Buddhas had been stolen from Songgwangsa a short time before Robert Mattielli purchased it.

Upon learning of the painting’s history, the Mattiellis and the Portland Art Museum immediately announced their intention to return the Five Buddhas to the temple.

Working with the Korean Cultural Heritage Administration, the museum mounted a special exhibition and organized a symposium that told the history of the painting. That exhibit was on display for several months before the painting was officially deeded back to the Korean people this weekend.

As Portland’s Arts Commissioner, Nick was honored to celebrate this repatriation, congratulate all the parties, welcome dignitaries from South Korea, and witness the deed-signing ceremony.

For more information about the Five Buddhas, visit the Portland Art Museum’s website.