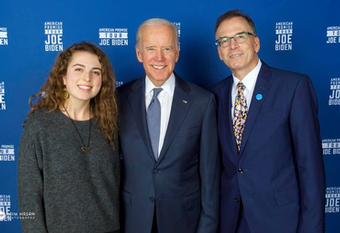 Biden served as the 47th Vice President of the United States from 2009 to 2017. The American Promise Tour is a series of conversations that connects people around “topics that matter.”

He spoke to a full house at the Arlene Schnitzer Concert Hall about his new memoir – Promise Me, Dad: A Year of Hope, Hardship, and Purpose. Literary Arts hosted the event, and Portland’s very own Kim Malek did a superb job interviewing Biden.

The book tells a deeply personal and moving story about his oldest son Beau’s battle with brain cancer. Biden reflected on the experience – how it affected him and his family, and how it altered the arc of his political aspirations.

The book and speech touched Nick personally as he navigates his own cancer treatment at the Knight Cancer Institute.