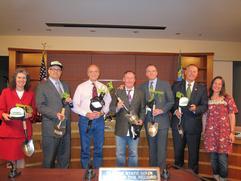 Yesterday, City Council unanimously approved an ordinance to raise charitable donations for the construction of Harper’s Playground, the first playground in a Portland park that will be designed for children with disabilities.  The new accessible playground will be in North Portland's Arbor Lodge Park.

The playground was spearheaded by Cody and April Goldberg, the parents of young Harper, who has a rare condition called Emanuel Syndrome.  The Goldberg family spent two years fundraising for the playground and are thrilled to see their dream finally becoming a reality.

Nick will join Parks Director Mike Abbaté, the Goldberg family, and community members at the ground-breaking ceremony tomorrow at 10 am to help celebrate this innovative park design that is a model for park improvements across the country.

Harper's Playground is about to become a reality