April is volunteer appreciation month, and this year, the City Auditor’s Independent Police Review (IPR) would like to honor Hank Miggins for his over 10 years of dedication with the Citizen Review Committee (CRC). Hank was an amazing man who gave selflessly to our community, and to his family and friends. 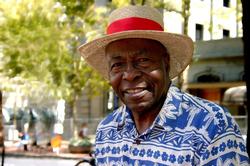 In 2001, Hank was one of the nine original CRC members sworn in following the police oversight reforms that led to the creation of the CRC and the IPR. Hank’s steady demeanor and strong analytical abilities were in much demand in CRC’s eventful early years where multiple citizen appeals of police misconduct investigations at monthly CRC meetings were common.  Hank was heavily involved in creating the policies and protocols that allows CRC to provide community input to Portland’s police oversight system.

Even after he retired from the CRC, Hank volunteered to serve as an Appeal Process Advisor to help community members who filed an appeal before the CRC, understand the process. During his 10 years of service to the CRC, he made himself available to mentor CRC members and the staff of the IPR.

Besides the CRC, Hank served on the Board of Directors of many organizations including the American Civil Liberties Union, the Rosemont School, Garlington Center, and Project Pooch, and Airway Science for Kids. He also served our nation as an officer in the Unites States Air Force for 22 years.

Hank, through his lifelong commitment to accountability and justice enriched the lives of many in our community and his efforts continue to pay dividends. Hank passed away on July 18, 2013 at the age of 78.