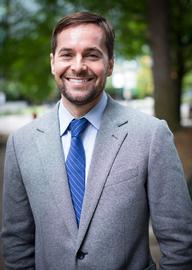 Director Ross Caldwell grew up in Toledo, Washington and went to college at the University of Washington and law school at Lewis & Clark College. Prior to joining IPR, he had worked as a Programs Director for the Criminal Justice Commission overseeing the Justice Reinvestment Grant Program and several other program areas and worked extensively with the different criminal justice system associations and counties around the state. Prior to the Criminal Justice Commission, Ross worked as a Deputy District Attorney in Multnomah County.