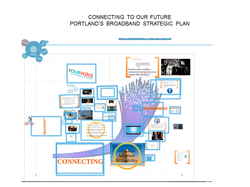 Portland's Broadband Strategic Plan (BSP), unanimously adopted by Council in the fall of 2011, brought together city offices and community partners in the recognition that high-speed affordable broadband to every home and business represents basic infrastructure for Portland in the twenty-first century.  It means jobs, education, health care, and access to services across the digital divide - all key elements of a sustainable city.  The success of the BSP, elements of which are embedded in the Portland Plan, will have important benefits for the city’s economic development strategy, climate change strategy, and the to the continuing impact of the current economic recession.

Mayor Wheeler joins coalition of mayors and municipal leaders calling for federal investment in affordable, accessible broadband (Feb. 2017) - Recognizing the importance of affordable, accessible high-speed Internet for all residents, Mayor Wheeler joined a coalition of mayors and municipal leaders in calling on President Trump and congressional leaders to ensure broadband investments are part of any new federal infrastructure plan. The letter documents the critical role of broadband in fostering business, education and civic engagement and seeks support for local efforts to improve broadband access. To learn more about the City’s broadband initiatives, see the Portland Broadband Strategic Plan and the Digital Equity Action Plan.

In Portland, the Path to Digital Equity: Building Inclusion from the Ground Up (December 2016)