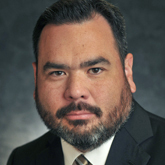 Jeff’s diverse communications career has included roles with the U.S. Army, Walt Disney Company, BMW, and the City of Lake Oswego. As a communicator, graphic designer, and facilitator, Jeff brings his creative and media relations experience to his role of Communications Manager with the City of Portland’s Office of Equity and Human Rights.

A combat veteran with ten years of broadcast journalism experience in the U.S. Army, Jeff worked in all facets of media: writing, producing, designing, and working on-air in radio and television. In 1991, he was named Broadcast Journalist of the Year by the Secretary of the Army.

During his time with the Walt Disney Company, Jeff held training and stage management roles, and worked with Walt Disney Imagineering as a show writer and graphic designer.

Jeff is responsible for the internal and external communications process at The Office of Equity and Human Rights and serves on the Training and Education Team, where he develops, co-designs, and facilitates racial and disability equity education.

His social justice experience is rooted in his lifelong involvement with the Japanese American Citizens League (JACL), the nation’s oldest Asian American civil rights advocacy organization. He served as Portland JACL President for two terms. He has also volunteered with Western States Center and served on the Board of Directors of MRG Foundation.