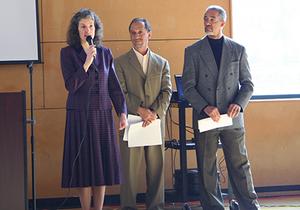 The Office of Equity and Human Rights (OEHR) hosts the Annual "We Are Portland" Awards on Friday, July 26, 2013 at Immigrant & Refugee Community Organization (IRCO) on 10301 NE Glisan St  Portland, OR. The public is invited to attend the ceremony which runs from 10:00 to 11:00 a.m.

The "We Are Portland" Awards honor civic activists and City employees who have worked to further the City of Portland’s immigrant integration initiatives. Special recognition will be given to Commissioner Amanda Fritz and retiring East Police Precinct Commander, Michael Lee.

Portland’s Office of Equity and Human Rights' New Portlander Program was recently invited to New York CIty by Mayor Michael Bloomberg to present its best-practices models at the Mayor's First Convening of Cities for Immigrant Integration.