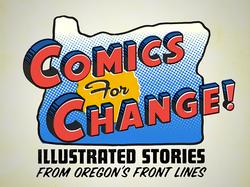 On December 12, 2013, Ronault “Polo” Catalani form the Office of Equity and Human Rights New Portlanders Program, was honored at a release party at Darcelle XV Showplace. Comics for Change! Illustrated Stories From Oregon’s Front Lines, a Know Your City project, features a series of ten comics, each telling the story of an Oregon activist.

Polo was selected for his 30 years of civic activism and assisting in integrating immigrant and refugee families into the life of our city.

In addition to Polo, the comic project honored:

Polo said he is really a community facilitator:

“While our family is honored by writer Lauren Hudgins' and cartoonist Asher Crew's superhero characterization, everyone knows that my work is setting the kitchen table where Portland’s real heavy-lifters sit and solve problems. “Knowing your City” means knowing this, and knowing them. Thank you Mark, Amanda, and the Know Your City board for urging Portland toward understanding this, and making Portland a bigger Us.”