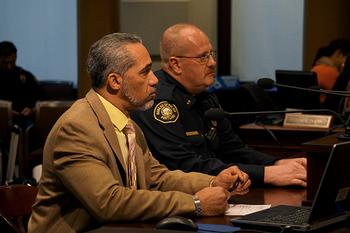 PORTLAND — The Director of Portland's Office of Equity and Human Rights, Dante James, presented a report to City Council on Wednesday about three listening sessions with City employees. On December 3, December 10, and January 7, approximately 200 City employees voluntarily came together during their lunch hours to discuss the aftermath of the Ferguson grand jury decision from an institutional perspective.

Topics of discussion revolved around: institutional and systemic racism; implicit bias; community/police relations; police training; the feeling by people of color of disempowerment and fear; as well as how these issues were created and fostered the tinderbox that exploded in the days following Ferguson.

Subsequent to Ferguson and the death of Michael Brown came other deaths in other cities that were high profile deaths of Black men or teenagers at the hands of police. The Office of Equity and Human Rights felt it important to provide a space for voices to be heard and frustrations to be expressed.

Here are the attendees' recommendations that James presented to Council:

Suggestions for All City Employees and Elected Officials

Portland Police Chief, Larry O'Dea, testified in support of the report and announced that two vital Police Bureau positions would be filled soon: an Equity and Diversity Program Manager (who begins next week) and an analyst who will focus entirely on stops data, specifically on criminal justice inequities and implicit bias.

The Office produced a video about the first session, held on December 3, 2014: