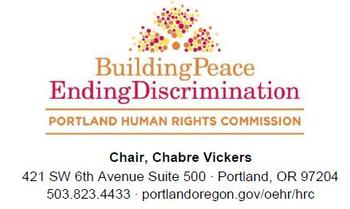 Re: Open Letter of Support for Resolution to support Muslim and Immigrant Community Members

To Mayor Hales, and Commissioners Fritz, Novick, Saltzman, and Fish:

The City of Portland Human Rights Commission commends the action taken by the City and writes in support of resolution 1334-1 which declared support for the City’s Muslim community and reaffirms Portland’s welcoming nature for all immigrants and refugees.

On Wednesday, December 16, 2015 the City took an important step forward in supporting and protecting our fellow community members in a manner that upholds human rights and moves us closer towards building a more inclusive place for all who live, work, play, and worship in the City of Portland.

As a commission we thank you and we urge you to continue to stand strong in the face of bigotry, racism, and discrimination in all of its forms both overt and systemic.

The Human Rights Commission is guided by the principles of the United Nation’s Universal Declaration of Human Rights. We believe that any attempts to restrict the movement of individuals based on their religious affiliations is in direct conflict with the Declaration’s Article 2, which embodies freedom from discrimination based on several distinctions, including religion; and Article 18, which affirms the right to freedom of religion for all.

In recent weeks the state of the national political landscape and the rhetoric that continues to be shared means that the concept of human rights itself for ALL is being questioned and the concept of eliminating discrimination and bigotry is something that seems to be under fire.

As the City of Portland Human Rights Commission we want you to know that if the same rights that we fight for and are privileged to have today are not afforded to our friends, family members, classmates, co-workers, and community members who identify as Muslim, our work is far from over. Your action taken on December 16th is indicative of leaders who are working on the right side of history to support us all.

We recognize the strength and vital nature in aligning as a community to support all community members and the intentionality necessary to specifically protect our Muslim community members at a time such as this. Thank you for your leadership in this effort and for the sponsorship of and unanimous vote in support for resolution 1334-1.

Signed on behalf of the City of Portland Human Rights Commission