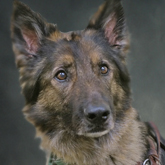 Ufi is an eight-year-old German shepherd. After roughly two years of training, he became Jonathan Simeone’s dog guide in February of 2013. Ufi and Jonathan were matched by the Fidelco Guide Dog Foundation in Connecticut.

When he’s not working, Ufi’s favorite activity is playing fetch. His beloved orange ring is the greatest toy ever invented.

If you see Ufi and Jonathan around, ask Jonathan if you can say hello to Ufi. Almost always the answer will be yes. Still, it’s good to ask.