Portland resident and former Rose Festival Queen Victoria Dinu spent the last two weeks visiting Jaragua do Sol, located in the northern Brazil state of Santa Catarina. While there, she attended the 9th annual music festival of Santa Catarina, Femusc. The Femusc brings together musicans from various cultures to take classes and play music together to find common bonds. Dinu, a noted violinist, interacted with fellow musicians and stayed with a local host family.

While in Brazil, the 22 year old Dinu created a tumblr blog, populating it with pictures of what she saw and descriptions -- in both English and Brazilian Portuguese -- of her experiences. The Lost in Brazil tumblr reflects the strong ties between Portland and Jaragua do Sol. Her blog has taken Portland -- and Brazil -- by storm.

Here in Portland, Dinu is a student at Portland State University studying communication with a minor in civic engagement and also works as a student ambassador for First Stop Portland. 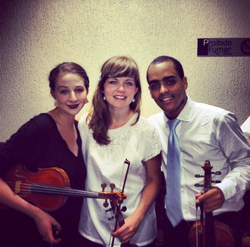