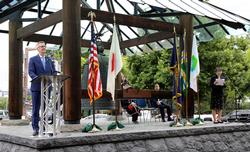 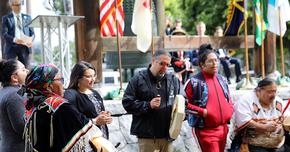 2019 marked the 60th sister city relationship anniversary between Portland and Sapporo - this connection is Portland's longest-running sister city relationship and one of the oldest in the United States. As part of the Oregon Convention Center plaza and interior renovation project, the Sapporo "Peace Bell" that was gifted to Portland by Sapporo 31 years ago was rededicated at a celebration hosted by the Oregon Convention Center on June 6, 2019. Attended by over 90 delegates from Sapporo, led by Mayor Akimoto, Portland Mayor Ted Wheeler and Sapporo, Japan Mayor Katsuhiro Akimoto expressed their continued commitment to strengthening the historic and productive relationship shared between both cities. Japan is Oregon's 5th-largest export market and in the span of six decades thriving partnerships along culture, education and business have blossomed through our sister city relationship. In the spirit of inclusion and acknowledgement, the theme for the 60th Anniversary between the two sister cities was centered on the Indigenous People who first lived in the Portland and Hokkaido region. "Like the Native Americans of the Pacific Northwest, the Ainu peoples of Hokkaido share commonalities which are embedded in the history of both of our cities, reminding us that the Pacific Ocean acts not as a barrier but a bridge between our two countries," said Mayor Ted Wheeler, following a land acknowledgement that was provided by Cowlitz spiritual leader Tanna Engdahl, and land protocols by canoe families from the Confederated Tribes of the Warm Springs, Cowlitz Indian Tribe and Chinook Nation Tribal Communities of the region.