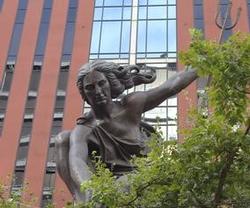 From high above the entrance to the Portland Building, Portlandia reaches out toward the passersby below.  Portlandia is the City’s largest sculpture and the second largest copper repoussé statue in the country, only after the Statue of Liberty.  If she were standing, Portlandia would be 50 feet tall!

In 1981, the City of Portland held a national competition inviting artists to submit ideas for a sculpture to be part of the new Portland Building. Michael Graves, the building’s architect, envisioned a large sculpture of Lady Commerce, the woman depicted in the city's seal.

In 1982, the City's Arts Commission, with public input, selected Raymond Kaskey’s design over the many other submissions.  Kaskey modeled the sculpture after his own wife, envisioning a much more powerful Lady Commerce than the other artists. The sculpture took three years to complete, requiring at least 50 hammer strokes per square inch. 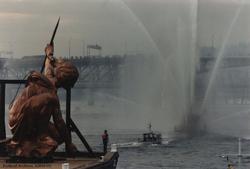 If you are a native Portlander, you may remember welcoming the 6.5-ton woman as she floated up the Willamette on October 6, 1985.

For a statue of her size, Portlandia remains fairly inconspicuous - tucked three stories above ground on a relatively narrow, tree-lined street.  Kaskey safeguards Portlandia’s low profile, as he still retains the copyrights.  Her image is not plastered on tee-shirts and trinkets, nor can it be reproduced for commercial purposes without Kaskey’s permission.  While the world may not recognize Portlandia, Portlanders embrace her as a tucked-away emblem of our city.