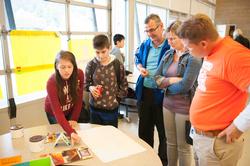 When the final design drawings for the Portland Building Reconstruction Project are released, a group of middle school students from SE Portland will be especially curious.

The students, from Ron Russell Middle School, spent some time learning about the project and creating their own designs for the public spaces in the building – and some of their ideas might just be picked up by the design team.  The City has been soliciting public input on what should be included when designing the building’s public spaces, and the Student Design Contest was organized to generate interest and gather input.

In September, project team members representing various disciplines visited the school to teach students about the building and introduce the contest.  Winners were announced during an October 5 open house for the project, held at the school.  With parents and teachers in tow, students came to explain their ideas to visitors, vote for their favorite designs, and talk to professionals.  Project architects and leaders admired student design features such as a rose-petal fountain as a lobby centerpiece for the Rose City, a glass floor atop a walk-upon aquarium, a “stressless” City staff break-room featuring massage chairs, and a model focused on enhancing accessibility for people with disabilities. 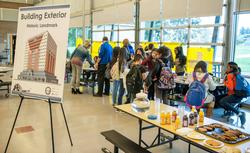 Submissions came from 53 students in Craig Pyne’s Makerspace classes – a DIY class where students design and create together using computer software, a 3D printer, and art and hardware tools. Each of the students’ submissions showed thoughtful consideration of how the public spaces could be used and creativity on how to achieve these outcomes.

As future users of a public building that is being designed to last well into the future, young people are key stakeholders. According to school principal, Andy Long, “I’m so grateful that the City took the time to work with our school, recognizing the talent and creativity of our students, and the importance of engaging outer southeast community members in major citywide projects.”

Some of the student design ideas are currently on display in the Portland Building’s 1st floor display case through Oct 28.