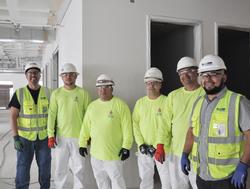 Randy Ramos, of RJ Ramos Construction & Electrical, was the first in his family born in the United States. His family immigrated here from Guadalajara, Mexico. His mother studied to become a US citizen while raising her children and supporting her family by working and investing in rental properties. She helped many families in need with inexpensive housing, never forgetting how her neighbors and church helped her and her family survive those first few years after coming to America.  When he was older, Randy and his sister were required to help clean and maintain the family’s rental properties. He eventually graduated to working on repairs and renovations on the rental units, becoming a seasoned jack of all trades.  That experience led him to begin performing full renovations, turn overs, and complete remodels.

Starting his own business in 2006, Randy began offering core services in the area of residential remodeling. Now, COBID-certified firm RJ Ramos Construction & Electrical is a subcontractor providing electrical services to the landmark Portland Building Reconstruction project, enabling the company to solidify its reputation in the large commercial construction projects field.

Randy joined electrical union IBEW Local 48 and has been an active union member for over 17 years. He has found that maintaining his electrical union status is an important way to save costs and offer a more inclusive set of services to his clients. Randy does offer non-electrical services as well, including roofing, drywall, acoustical ceiling, framing, and painting. Randy’s long-term goal is to become an 8A Certified Contractor, which would allow for his business to grow even more.

Work on the Portland Building Reconstruction project has marked a turning point for Randy’s company, moving toward larger commercial projects. Offering an expansive list of services, along with good timing and guidance from the project’s prime contractor Howard S. Wright (HSW), has made this a smooth transition for RJ Ramos Construction & Electrical. Randy notes that support with contracting and due diligence, professionalism, and general encouragement from HSW and from Project Manager Todd Miller in particular, have contributed to his company’s positive experience working on the Portland Building Reconstruction project.

Randy is joined by his youngest son, Ivan, who just graduated from Franklin High School last year. Working with Randy as a Union Local 48 material handler, Ivan has recently passed his union apprenticeship test and will soon become an apprentice electrician. Ivan can hardly control his excitement at the hourly rate that he will be earning going into this highly skilled trade at just 18 years old. Ivan’s dad is just as proud to be able to share this opportunity with his son. Randy’s other sons have also expressed interest in joining their father’s company, making it truly a family business.

With its sparkling white trucks and vans traveling throughout the Portland metropolitan area, RJ Ramos Construction & Electrical has been a case study for hard work, perseverance and being in the right place at the right time. Contact RJ Ramos for more information at (503) 233-1435 or https://www.rjramosconstruction.com/