Thirty-nine-year-old carpenter Renee Angel joined the Carpenter’s Union in 2011 and is now an experienced carpenter working on The Portland Building Reconstruction project. Her path to becoming a carpenter was not a direct one, but with the help Oregon Tradeswomen and some practical experience at Coffee Creek Correctional Facility, she now loves her work. 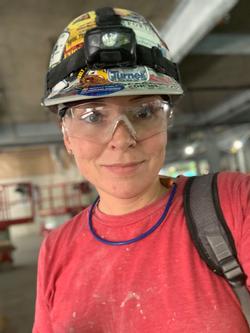 Several years ago, Renee found herself a second time resident of the Coffee Creek Correctional Facility with no clear picture of what she wanted to do with her life. A friend talked her into working on a project installing siding on a facility building. She wasn’t particularly interested in the work – she didn’t like getting her hands or her clothes dirty and was afraid of the power tools - but the facility required her to choose a job and this was one of two options. She and 10 other women completed the siding work, and Renee was surprised at how much she enjoyed it and how proud she was of the finished product.

When she was released from Coffee Creek, Renee considered her options for work and, recalling her satisfaction with the construction work she’d done while incarcerated, she went to Oregon Tradeswomen to develop her skills in the construction trade. Ultimately Renee chose to focus on carpentry and prepared for the interview process to join the Carpenters union. Renee also shared her passion for the trade with her now husband, convincing him to pursue carpentry as well.

Celebrating five years clean and sober, Renee loves her work and feels her life is on track.  She has recently married and purchased a puppy. She and her husband belong to As Is, a local church that has played a big role in their lives. Both are now members of the Carpenters Union; they volunteer together in their off hours for community projects as part of the Carpenters Volunteer group.

Renee has found working on the Portland Building as a subcontractor to IES Commercial & Industrial to be very rewarding, in part because she uses so many of her varied skills. The many other women working on the project make it a unique environment for a woman in the construction trade. Renee enjoys working with prime contractor Howard S. Wright, as she has had the opportunity to do many times over the past several years. Thinking back to her Coffee Creek days, Renee still loves seeing a completed job well done, taking on new challenges and projects, and meeting new people. The physical aspects of her work particularly appeal to her; she cannot imagine sitting in an office all day.

Although it was not a direct path getting there, Renee says that she is in exactly the right place now. She loves her job and advises other women to give construction a try. It’s a great job!