Sign up for the Tree Bark newsletter to receive email updates of Portland's urban forest news!

PP&R Urban Forestry is pleased to announce the neighborhoods selected for street tree inventories in 2014:

Conducting an inventory and creating a neighborhood tree plan are ambitious projects that require the help and commitment of a group to be successful. If you live in an inventory neighborhood, join the inventory effort! Tree teams are seeking help planning work days, securing inventory locations, and recruiting volunteers.

All persons who will be assisting with organizing the tree inventory are encouraged to attend.This planning session will cover inventory logistics, volunteer recruitment, planning tools, and responsibilities of your group and PP&R.

Please bring the following items with you to the March 8 planning workshop:

Join Jim Gersbach, long time Tree Steward and Hoyt Arboretum Volunteer, for his presentation Endangered Eden: The Snow Gum Forest of the Australian Alps.  For More information Click Here.  Despite our recent snowfalls and double dips down to the low teens, Portland’s ocean-moderated climate is mild enough to grow a wide range of trees from distant lands that our compatriots along the same latitude in states east of here cannot. A striking example are the Australian snow gums, members of the genus Eucalyptus. Many Oregonians associate eucalypts with California, where several species have been widely planted due to their ability to tolerate heat and extreme drought.  So visitors and native Portlanders alike are often surprised to see eucalyptus growing in the City of Roses.

Portland’s hardiest eucalyptus in the wild 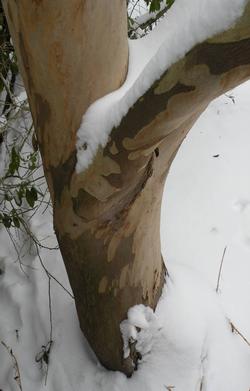 Of the more than 750 recognized species of eucalyptus, the species that has arguably proven the hardiest in the Pacific Northwest is Eucalyptus pauciflora, in particular its subspecies niphophila and debeuzevillei (first recognized in 1973 as distinct from the type).  These two subspecies grow in the mountains of southeast Australia. Many other parts of Australia can see temperatures fall below freezing on winter nights but the mercury usually rises with the sun. Only in the Snowy Mountains and Australian Alps (usually at elevations above 4,500) feet are trees subjected to temperatures approaching those of a typical Portland winter.

As one hikes up these mountains in Victoria and New South Wales as I did last November, one passes through thick stands of tall mountain ash (E. delegatensis) and mountain gum (E. dalrympleana). These give way to E. pauciflora, which forms pure woodlands as one approaches the treeline, which varies between 5,500 and 6,500 feet.

Much of this subalpine zone was devastated by immense forest fires during the past decade. Driving toward places like Alpine National Park in Victoria the first impression is that the mountain sides have been touched by a silvery frost. On closer inspection it becomes clear that these are the snags of millions of gum trees, their fire-blackened trunks bleached to a light gray by the snow and rain.

Like many species of eucalyptus, the snow gums have adapted to Australia’s frequent fires by being able to regrow in one of two ways. If fires are low intensity and don’t burn beneath the outer layer of bark, within a few weeks the trees can push out new growth from their trunks. If hotter fires kill the above-ground parts of the tree, they can regenerate from their main root, called a lignotuber. Shoots from the lignotuber will quickly form new trunks, which is why the snow gums I saw in formerly burned over areas were almost all multi-stemmed.

A profusion of shrubs and herbs flourish in the sunlight created after a fire. It is amazing to walk through these fire-created meadows in spring, when brightly colored butterflies mob the white, yellow and purple spring flowers. Within a decade or so new shoots from the snow gums will once again form a closed canopy, topping out at about 20 to 30 feet. This smaller size is what makes snow gums a comfortable fit for Portland’s increasing number of more compact yards.

One close contender with the snow gum for title of hardiest eucalyptus in Portlandis the spinning gum (E. perriniana). However, I have never liked the bizarre look of the round juvenile leaves stacked on the branchlets like pieces of meat skewered on a shish kebab. By contrast, snow gum leaves are a gorgeous grayish-blue color and lance shaped. They cast only a light shade, making it easy to grow other plants beneath them, and they yield a faint but pleasant menthol smell, especially when rubbed. Be aware that while evergreen, eucalyptus shed old leaves periodically throughout the year.

Eucalyptus have adapted toAustralia’s ancient, low fertility soils by reabsorbing most of the nutrients and moisture in their leaves before casting them off. As a result, the leaves don’t break down readily in Oregon soils, making it important to periodically remove them. However, because they’re flat and dry, I find them both difficult to pick up by hand or rake. This minor annoyance is more than made up for by the spectacular beauty of the tree’s bark.

Sensually smooth and peeling cleanly from the tree in strips, snow gums are among the best of the eucalypts for 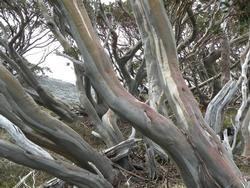 year-round bark interest. In the wild, trees exhibit a pleasing array of hues and patterns on their trunks. I saw everything from dark gray, silver and ivory to cream, tan, ochre, pink, and chartreuse, often on the same tree. Saplings and new branches emerge with a whitish coat, the best bark effects taking a few years to appear as the tree attains greater girth.

I planted a niphophila snow gum in my backyard in 2002. Bought from Transpacific Nursery outside McMinnville and grown from seed obtained from trees on Victoria’s Mt.Hotham, the tree has flourished with little care. It has reached 20 feet and almost a foot in diameter. White flowers appear high up in the tree every year. These are barely noticeable but apparently a good source of pollen for bees, although reportedly not as rich in nectar as many other species.

My snow gum has sailed through temperatures as low as 12 degrees with no damage. In the decade since I planted it, a variety of eucalyptus species have been trialed in Portland. Most survived the milder winters but were cut back by freezing east winds when daytime temperatures remained below freezing. Ones that weathered our two most recent cold snaps nearly as well as the snow gums have included the Argyle apple (E. cinearea), the narrow-leaved black peppermint (E. nicholii) and the tingiringi gum E. glaucescens.

If you’re considering planting a snow gum, be sure to site it with plenty of sun – the trees detest shade and will corkscrew into tortuous shapes to reach sunlight. While many of the eucalyptus species in California are noted for being able to survive on scant rainfall, snow gums come from parts of Australia with generous precipitation, so be sure to water young trees during our dry summers.

In considering growing any tree foreign to Oregon, one should carefully consider the tree’s potential for invasiveness. Our experience with English holly (Ilex aquifolium) and tree of heaven (Ailanthus altissima) being two notorious examples of what can happen when trees reproduce out of control into natural areas.

California has seen a few eucalyptus species, notably the blue gum E. globulus, become naturalized. This is due in large part to those species’ ability to quickly reproduce and regenerate after California’s frequent fires, which open up vast areas ripe for colonization. I’m unaware of any problems with E. pauciflora or its subspecies reseeding here. Despite its quick growth rate, the tree’s absolute requirement for full sun and low maximum height should severely limit its ability to compete with natives in Oregon’s taller-growing Oregon hardwood and softwood forests of Northwest Oregon.

Proper pruning is essential in caring for trees. Learn basic tree biology, pruning techniques, and how to promote good structure for young street trees. Receive instruction on how to prune properly and for good street structure, and then practice your new skills on young street trees under the guidance of Urban Forestry's ISA Certified Arborists.

Change is coming to Mt.Tabor Yard!

The tree nursery at Mt.Tabor yard is closing due to budget cuts and after using as many of these trees as we can in our parks and green spaces, there are still a few left.

We’d like to thank our neighbors and volunteers by inviting you to come and choose from our remaining stock.  Come give a home to some of these great trees and help grow Portland’s urban forest! 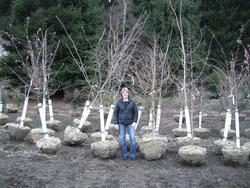 What have we got?

Below is a sample of the trees we will have available.

Black tupelo (Nyssa sylvatica) – This is a drought tolerant southerner for medium sized spaces.  (4ft or > planting strips with wires)

Accolade elm (Ulmus "Accolade") – This disease resistant elm will bring its large green vase to your home or planting strip. (6ft or > planting strips without wires)

Lodgepole pine (Pinus contorta) – a large straight trunked evergreen that will need room to go up! (6ft or > planting strips without wires)

Common hackberry (Celtis occidentalis) – Distinctive bark and small berries are a few of the things that give this large hardwood interest.  (8.5ft or > planting strips without wires)

If you intend to plant your tree between the sidewalk and the curb, you will need a site inspection and a permit.
Street trees fall within the public right of way and as such they are regulated by the City of Portland, and must meet certain standards.
When you sign up, indicate that you will be planting a street tree and we will schedule a city tree inspector to come out, mark the curb with the appropriate planting location prior to issuing a permit.
When you choose your tree, make sure it is on the approved street tree planting lists. 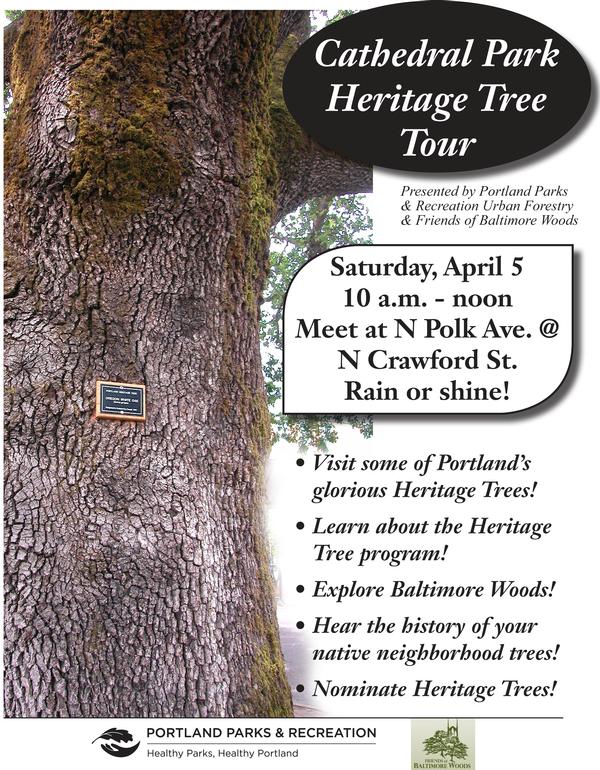