Kʰunamokwst Park in NE Portland's Cully neighborhood opened permanently on April 25, 2015, and celebrated with a community wide Grand Opening Celebration on May 16, 2015.

SPECIAL NAMING CEREMONY
Portland Parks Commissioner Amanda Fritz joined neighbors, partners, and special guests to reveal the name of the first developed park in the Cully neighborhood, Kʰunamokwst Park (pronounced KAHN-ah-mockst - click to hear the full pronunciation). Kʰunamokwst is a Chinook wawa name meaning “together”. Kʰunamokwst will be the first PP&R park to enjoy a name indigenous to the land it sits on. Chinook wawa is the language commonly used by the original people of this area. Press release

Right-of-Way Improvements
As part of the park development, half-street improvements will be completed on the park frontage along NE 52 & Alberta. This work is being completed by PBOT: http://www.portlandoregon.gov/transportation/article/442488

March 2014
PP&R is nearing completion of the final construction documents for the park. The project is currently in the permitting process; we hope to advertise for bids in May 2014. We anticipate construction will commence in August 2014 with the park opening in spring 2015.

Skate Dot Option
The Skatepark Advisory Committee provided guidance on the development of two designs. One of their goals is to integrate more “street skate” options within our park system. Street skate designs also tend to be very suitable for beginning skaters who are the intended users for this skate dot.

Based upon the feedback we received regarding the skate dot, the overwhelming response from those who participated and commented on the designs was to move forward with Option #2 illustrated below. This option has been incorporated into the design drawings and will be constructed as part of the park development. The skate dot is approximately 2,000 square feet and can accommodate 1-2 people skating simultaneously with room for 5-10 others either waiting their turn or watching. 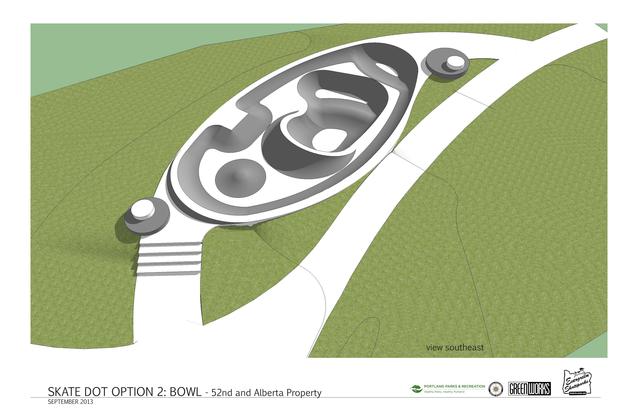 The Werbin Property Master Plan was a collaborative effort between Portland Parks & Recreation, the Cully community, and the Project Advisory Committee. The plan is a vision for the project site and a framework to guide the preparation of detailed design documents for the development of the park. Given the amount of public outreach that has occurred on the project as well as acceptance of the master plan by City Council, PP&R will not entertain alternative design concepts. Any significant change in design will require written approval from the Owner’s Representative and substantive changes will necessitate public information meeting(s) per the direction of the PP&R Project Manager.