The Vera Katz Eastbank Esplanade will reopen on Friday, March 29, 2019 by 3pm, after eight weeks of repair and maintenance work, and several days ahead of schedule. Portland Parks & Recreation, the Portland Bureau of Transportation (PBOT), Bureau of Environmental Services (BES), and the Regional Arts and Culture Council (RACC) partnered to make a cleaner, safer Vera Katz Eastbank Esplanade.

The project benefits thousands of cyclists, runners, walkers, and other visitors to one of Portland’s most iconic public amenities. According to PBOT, during the summer months the Eastbank Esplanade sees approximately 2,400 daily bicycle trips (almost 500 during the two-hour peak commute) and approximately 1,200 daily walking trips.

A celebration of the project’s completion will be held on Friday, April 5, 2019:

WHAT: Vera Katz Eastbank Esplanade reopening celebration - an opportunity to acknowledge the collaborative effort that went into restoring the Esplanade.

WHERE: Eastbank Esplanade at the SE Salmon Street Plaza

“With spring officially here, we’re proud to reopen the Eastbank Esplanade,” says Portland Parks Commissioner Nick Fish. “We do our best work in partnership with others and I want to thank BES, PBOT, and RACC for helping to revitalize this community treasure.”

This phased project was funded by the City’s Adopted Budget for Fiscal Year 2018-19. It includes $500,000 in one-time General Fund resources, plus $200,000 in ongoing funding for maintenance and safety Future improvements will be completed as funding becomes available.

PBOT and PP&R worked together to open Better Naito on January 28, 2019, to provide a safe detour during the maintenance project. The City thanks all neighbors and visitors for their patience during the project! And more good news: Better Naito will remain open to provide space for people walking and biking adjacent to Waterfront Park.

This is the third year of the Council-approved, 5-year implementation of Better Naito. Like in past years, PBOT has installed plastic posts to separate one northbound motor vehicle lane on Naito Parkway from SW Main Street to NW Couch Street. A designated passenger drop-off zone on SW Taylor Street is available to accommodate people being dropped off by personal vehicles, taxis, and rideshares.

Additional information about Better Naito can be found at betternaito.com 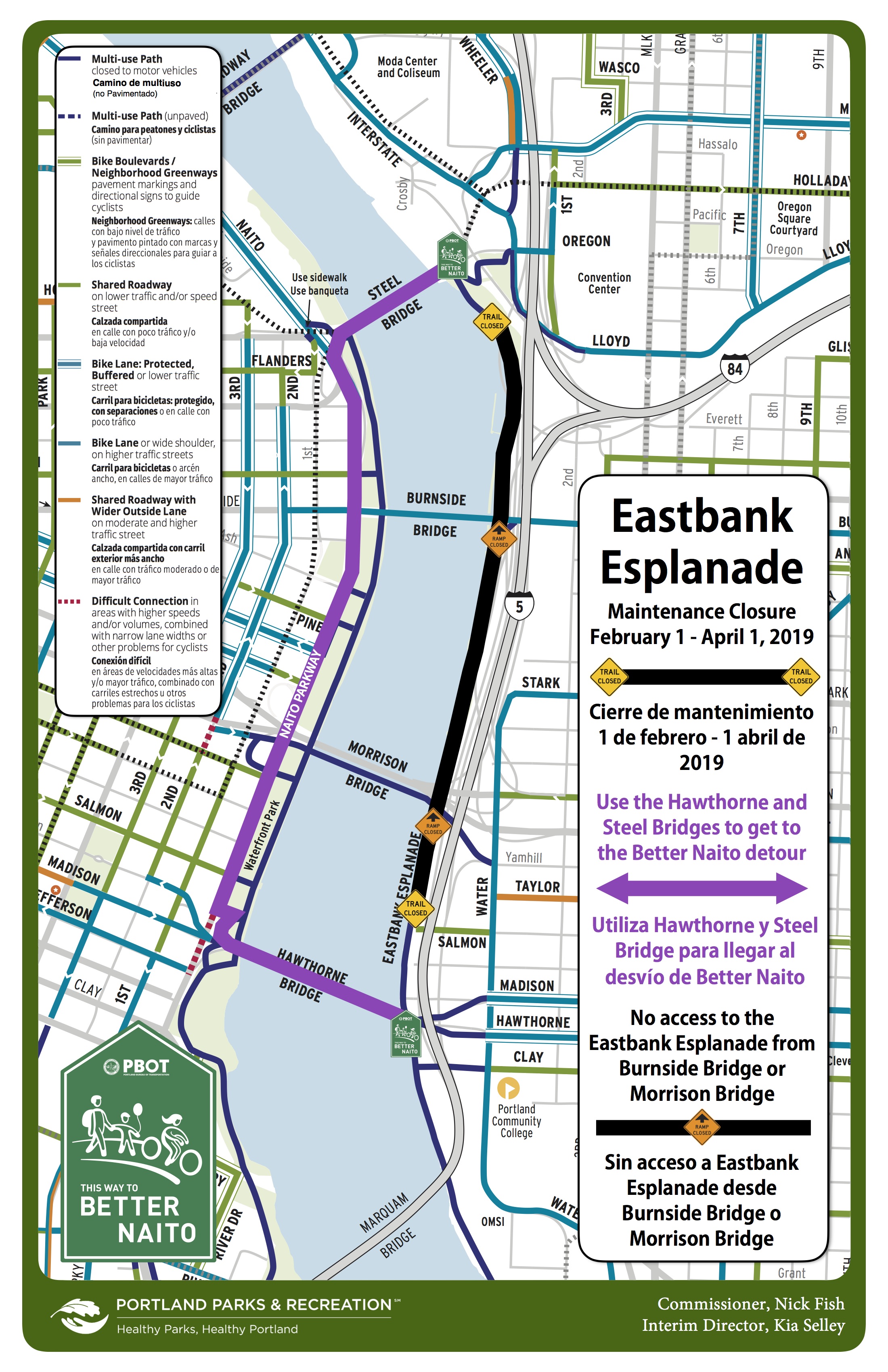 The Vera Katz Eastbank Esplanade is one of Portland’s iconic sites and pathways, both a beloved City park and a major bicycle and pedestrian thoroughfare running approximately 1.5 miles along the east bank of the Willamette River from the Hawthorne Bridge to the Steel Bridge. At the direction of Portland Mayor Ted Wheeler, the Fiscal Year 2018-19 Adopted Budget includes $500,000 in one-time General Fund resources, plus $200,000 in ongoing funding for maintenance, to begin addressing the issues on the Esplanade and making safety and functional improvements.

The Esplanade was named after Mayor Vera Katz in November 2004 to honor her vision and leadership for Portland - which included support for the construction of the esplanade.