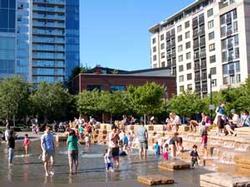 This water feature in Portland's Pearl District is named for the late William Jamison. The fountain is a focal point of the square on hot summer days, simulating a shallow tidal pool. Water cascades from stone joints into low pools. The fountain continuously recirculates treated water. Energy efficient pumps and motors keep the water flowing in this fountain. 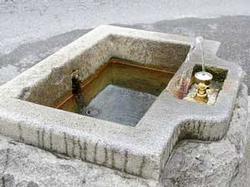 Portland's 'horse trough' is perhaps more of a drinking fountain than a typical decorative fountain. Installed sometime in the early 20th century, the fountain's original intent was as a drinking trough for horses. It also has a bowl at the base, presumably for dogs, and a drinking spigot for humans.

In 2003, National Geographic did some research on the fountain, and found that children had raised money to purchase it because they felt sorry for the poor workhorses pulling loads up the hill on Thurman.