ALL fountains citywide will be up and running by Memorial Day weekend, and many by May 1.
Click here to view a printable walking tour of fountains in downtown Portland. 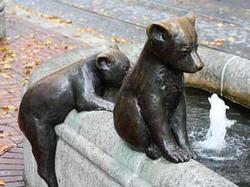 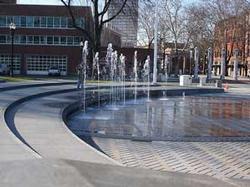 While the upper fountain may be seasonally on, it will always be off  when Portland's Saturday Market is open. The Bill Naito Legacy fountain honors Portland’s immigrants with a poem etched into its steps, celebrating the diverse cultural influences that have shaped the city. 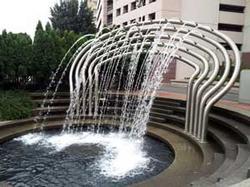 This tubular fountain designed by Carter, Hull, Nishita, McCulley & Baxter, was installed in 1977. A wind gauge shuts off its water on gusty days to prevent hazards for motorists and splashing of pedestrians! 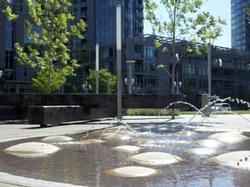 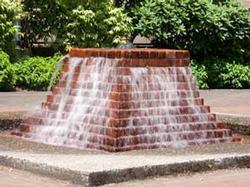 This small red-brick fountain was part of the Portland Development Commission’s inaugural urban renewal project. The chimney symbolizes the neighborhood before urban renewal, and gives the illusion of smoke flowing from between the bricks. The area was home to Italian and Jewish immigrants who had small homes in the area as well as shops. 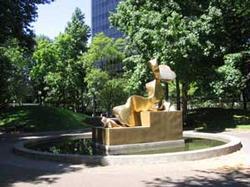 The Portland Development Commission installed fountain in 1979. The sculpture was created by Manuel Izquierdo, professor emeritus of Pacific Northwest College of Art, and is made of "yellow metal" or malleable brass. The artist hammered the sculptural forms into rounded shapes. When it was unveiled, he said the sculpture:“Speaks of hope, of beauty and serenity, of love, and for a better life in our midst.” By filling the cast bronze statue with foam, he enabled the statue to make a soft sound when rain strikes it rather than booming like a drum. 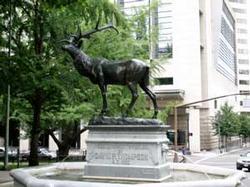 David P. Thompson drove sheep to Portland over the Oregon Trail. From 1879-82, he served as Portland's Mayor. In 1900, Thompson's gift of this bronze elk sculpture was intended to commemorate elk that once grazed nearby. Roland Hinton Perry sculpted the elk. 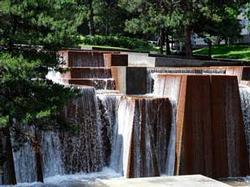 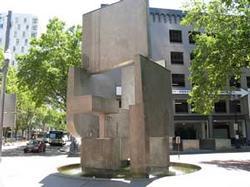 Water flows over twenty-foot steel shapes in this fountain designed by Lee Kelly, one of Portland's most prolific artists. Installed in 1977, it is popularly known as the Kelly Fountain. 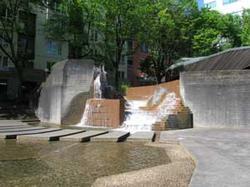 Halprin and Associates designed this stair-step fountain in 1968 for the Portland Development Commission. It celebrates the waterfalls and landscapes of the Northwest. Asa Lovejoy co-founded Portland with Francis Pettygrove. 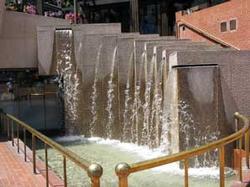 In the late 1970s the City acquired this land for use as a public square. Architect Will Martin designed the square and its waterfall fountain in 1983. Its primary architectural feature is the use of imported tile. Martin playfully included in the design a sculpture of his bronze hat which can be seen at the fountain’s top. At full capacity, the main fountain cycles 900 gallons per minute, while the upper trough recycles 300 gallons per minute. 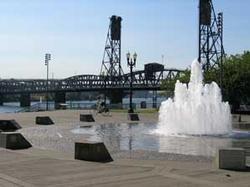 Robert Perron Landscape Architects and Planners designed the fountain which was dedicated in 1988. A computer regulates the changing patterns of the water display. At full capacity, the fountain recycles 4,924 gallons of water per minute through as many as 137 jets at once. There are 185 jets. The three cycles of the fountain are called misters, bollards, and wedding cake. 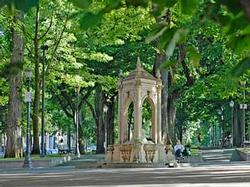 This Italianesque trefoil design fountain was a gift to the city from Joseph Shemanski in 1926 to thank the city for its kindness to him. Shemanski was a Polish immigrant who went from being a traveling clock salesman to successful businessman. Carl L. Linde designed the cast stone structure that surrounds the bronze sculpture by Oliver Laurence Barrett. Rebecca offered to draw water for Abraham's servant and many camels - possibly as much as a half ton of water. By providence, Rebecca's act of kindness and service revealed her as the bride. 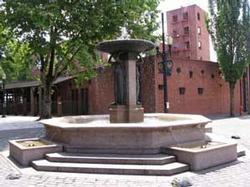 This area was the center of downtown Portland when the bronze fountain was placed here in 1888. Stephen Skidmore, a druggist who arrived in Portland by covered wagon, left $5,000 in his will for a fountain for men, horses, and dogs. His friends raised additional funds to commission a design by Olin Warner. It is inscribed "Good Citizens Are The Riches Of A City," a quote from C.E.S. Wood. Wood convinced Olin Warner to take the commission for this fountain. When Warner named a price of $18,000, three of Skidmore's friends quietly made up the difference. For the dedication, brewer Henry Weinhard offered to pipe beer through the fountain, but the chairman of the Fountain Committee declined. For nearly two decades, people drank from tin cups that hung from the lions' heads at the base of the fountain. Skidmore Fountain is Portland's oldest piece of public art. 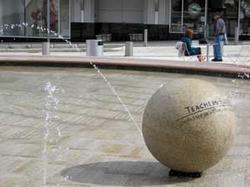 Hours: Off for season: Teachers Fountain may periodically be off for rentals or events.

Teachers Fountain is  "Dedicated to all who educate and inspire." The fountain is a playful but elegant display of arching jets and low burbles that run downhill into a shallow pool. There are eight modest jets, between 3-5' high, and eight burbles approximately 12" high within the pool to gently move the water. The water in the pool spills over a barrier beneath the bench, recirculates through the sanitary system, then cycles continuously back through the display. The display does not vary or interact with users.