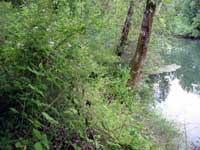 The Columbia Slough is approximately 19 miles long and stretches from its origin at Fairview Lake westward to its confluence with the Willamette River. In spite of its urbanized character, the Columbia Slough contains surprising biodiversity. Mammals such as deer, beaver, and river otter are common along the slough, and about 175 bird species have been documented in the watershed (including a number of neotropical migratory birds). Western painted turtles (one of only two turtle species in Oregon) and several salmonid species inhabit portions of the slough. The slough provides a valuable wildlife corridor that runs from the Sandy River Delta to the Willamette River. Acquisition opportunities include remnant vegetated patches along the slough channels, wetlands, and adding to the few large upland protected sites.

Protect and enhance habitat and linkages along the Columbia Slough.