The bigleaf maple – Acer macrophyllum – is an aptly named tree.  The enormous leaves of this northwest native average 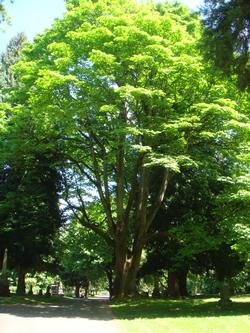 6-12 inches and can reach an unprecedented 15 inches, the largest of any of the 125 species of maple worldwide.  Like all maples, the seeds are housed in winged samaras and children in the northwest know them as the “helicopter” seeds, delighting in the way the seeds spin to the ground.  The bigleaf maple is a ubiquitous West Coast tree, from California to British Columbia, where its nutrient-dense leaves enrich the soil and abundant seed crops provide food for birds and squirrels.  Not as frost hardy as its cousins, Acer macrophyllum is otherwise tolerant of some shade and prefers moist soils, thought not flooded.  When allowed to grow in the open, the tree can be as wide as it is tall, making it a natural – and often self-sowing – candidate for a shade tree.  Its dense, sturdy frame commonly hosts another world of mosses, lichens, and licorice ferns, which together can way four times as much as the foliage does.

The native northwesterners ate maple sprouts, and the sweet sap can also be made into syrup, though it is not done so commercially.  The burls common to the bigleaf maple have interesting grain patterns and are sought after by specialty craftsmen.  There are two maples on the Heritage Tree list, #252 and #295.  Tree #295, in the Lone Fir Cemetery was planted for General Joseph Lane, the first governor of the Oregon territory and the state of Oregon’s first senator.  Phyllis Reynolds, author of Trees of Greater Portland, recommends viewing these lovely trees in April.