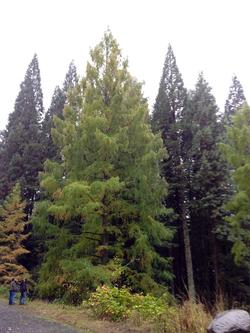 special tree to the Portland Heritage Tree list.  The dawn redwood isn’t overwhelming in size, height, or age and there are already five dawn redwoods on the Heritage tree list.  So what makes this tree so special?  Well, this is the first dawn redwood to bear seed cones inOregon in at least 5 million years.

What did you say?

During the Miocene, 25-5 million years ago, the deciduous conifer Glyptostroboides metasequoia flourished around the world and in North America.  Their presence is evidenced by the fossil record (they are in fact the state fossil of Oregon).  The story of the dawn redwood is one of good timing.  In the early 1940s, a Japanese paleobotanist first described the fossil of a unique tree.  Not far away and shortly after, near the village of Moudao in China, a Chinese forester discovered a peculiar deciduous conifer he thought to be a Glyptostrobus, a Chinese swamp cypress.  He collected some samples from the tree, and later passed them on to a student at the National Central University.  The samples made their way into the hands of Dr. Wan-Chun Cheng, who concluded it was not a swamp cypress at all, and in fact was a new genus entirely.  New specimens were collected, and eventually were passed onto Dr. Hsen-Hen Hu, who matched these to the recently described fossils.  Through the late 40s, seeds were distributed to many places across the world, again, lucky timing, as the People’s Republic ofChina closed its doors to the outside world in 1949.

The Hoyt Arboretum was one of the recipients of dawn redwood seeds in 1948, making Portland home to some of the oldest trees in this country.  In 1952, one of these trees became the first to bear cones in the western hemisphere – the tree to be dedicated April 30th.