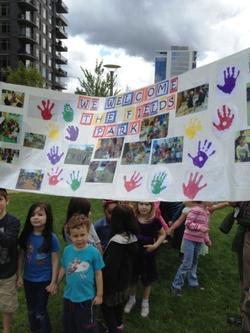 The Fields Park, a brand-new 3.2 acre park, opened to the public on May 6, 2013; the grand opening ceremonies were today. The park consists of a one-acre lawn/common area, sitting areas, a strolling path, entry plaza, Portland Loo restroom, and a large children’s playground. The park also has an 8,000 square foot dog off-leash area, the 33rd in PP&R’s system, the first of its kind designed as a dog area from the ground up.

“The views here are amazing,” noted Portland City Commissioner Nick Fish, whose office helped supervise the project. “The Fields is another example of why Portland is such a wonderful place to live, and what we can accomplish together. We’ve transformed this spot from an industrial site to a place for activity and play. I’m proud of our city and so thankful to the neighbors and partners who have worked for years to make this park a reality.”

The grand opening ceremonies began with a Native American blessing of the land by Lois Chillcot, Elder from the Menominee tribe, followed remarks from City and community leaders, and a reading by noted professor Barry Sanders. Students from the nearby Montessori Childpeace School performed a song, and preschoolers from the Portland Public Schools Early Learners Academy at the Ramona presented a banner to commemorate the long-awaited neighborhood park. The park was designed by the Office of Cheryl Barton, landscape architects.

“I love that The Fields has already become a living room for the Pearl District,” says Clayton Lloyd, who lives nearby. “There's space for everyone to relax and roam. The sweeping view of the Fremont Bridge is uplifting, and helps clear my mind when I go for a lunchtime walk. We've enjoyed seeing the many ways people use The Fields. Recently we saw Frisbee, soccer, and catch being played, along with kite flying, meditation, sunbathing, and picnicking!”

“The Fields Park is incredible,” beamed Abbaté. “It’s the third park in a series of parks throughout this urban renewal area. One can easily forget that the bustling Pearl District was only recently an industrial area in need of some care. We have reclaimed the space for a vibrant neighborhood park for recreation and activity, and it is a tremendous gathering place to connect with the outdoors.”

Six bronze sculptures adorn the southwest and east sides of the park. This amazing public art is the work of artist Christine Bourdette. with support from the Regional Arts and Culture Council (RACC) and Peggy Kendellen. The large and versatile (1 acre) open lawn can be used for informal sports and pick-up games, soaking up the sun, and more. There is plenty of seating on benches and other areas, with a strolling path circling the park. The Fields will be enjoyable for all for years to come.

Total construction cost for The Fields was $3.9 million dollars.

PROJECT BACKGROUND
The Fields is the third park that was outlined in the Portland River District Park System Urban Design Framework Study in January, 2001. The study included planning and design concepts for four parks within the Urban renewal Area (URA) located between NW 10 and 11 Avenues, beginning at NW Johnson. The four parks include Jamison Square (completed 2002), Tanner Springs (completed 2005), The Fields (opened May 6, 2013), and a potential Riverfront Park. The Fields is situated within the Hoyt Street Yards portion of the Pearl District Neighborhood Association (PDNA).

In the early 1900s, the Pearl District was a major industrial and transportation hub of Portland, with extensive rail yards, warehousing, and manufacturing facilities. In the 1950s, many industrial activities were relocated as transportation patterns shifted from water and rail to surface transit on interstate highways and air. The low rents that soon followed created spaces for artists and small businesses.

The Pearl District of today began in the early 1980s with extensive planning efforts to convert warehouses and rail yards into mixed use development. Pearl District redevelopment gained momentum in the 1990s which resulted in urban mixed use with multi-family residential buildings, offices, and a broad range of retail shops and services.

The City and Hoyt Street Properties enjoy a development agreement that sets the stage for public investments in infrastructure projects such as the Portland Streetcar and parks and private investments in high-density, mixed-use development and affordable housing.