An island of unused land at the confluence of two freeways takes another step towards becoming a new city park in east Portland, and a regional off-road biking destination. 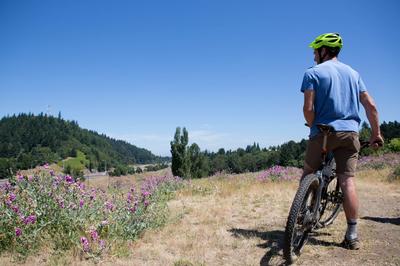 Portland Parks & Recreation (PP&R) has acquired the 25-acre Gateway Green property, with plans, in concert with Friends of Gateway Green, to build an off-road biking facility on the land. Portland City Council unanimously today authorized the land transfer from the Oregon Department of Transportation (ODOT) using funds from System Development Charges (SDCs), not tax dollars. SDCs are fees paid by developers to support the increased infrastructure required when homes and businesses are built. $19,300 in SDCs will fund the land acquisition.

“It is wonderful to take the next step on Gateway Green, an open space long envisioned for outdoor recreation,” says City Parks Commissioner Amanda Fritz. “The location between I-205 and I-84 will boost Portland’s visibility as a world-class bike-friendly city, and is a tremendous use of the underutilized land. The driving force on Gateway Green has been the persistent grassroots effort. I admire how neighbors and cyclists have come together to see their vision for Gateway Green move forward. Portland Parks & Recreation is committed to partnering with community advocates to make Gateway Green a regional gathering place for families. It will be an important addition to our infrastructure that enhances wildlife habitat and recreation for children, families and seniors.”

“The Portland cycling community has long asked for more recreational opportunities across our system,” says Portland Parks & Recreation Director Mike Abbaté. “Gateway Green will provide a place where bicyclists of all ages can gather, develop their skills and enjoy the outdoors, all while increasing their physical health.”

The brainchild of two dedicated community members, Linda Robinson and Ted Gilbert, Gateway Green has blossomed into a regional project that involves and is supported by multiple partners, including ODOT, PP&R, Oregon State Parks, Metro, the City of Maywood Park, bicycle, environmental, and neighborhood groups, who are working together to realize the original vision.

“Obviously this is a huge step for the Gateway Green project -- and an exciting day for me,” says Linda Robinson, a notable park advocate for more than two decades. “'Patient persistence' -- that's my personal motto. And this is a perfect example of how patient persistence can pay off.”

“Portland Parks & Recreation thanks Linda, and Ted Gilbert, for their years of advocacy towards making Gateway Green a reality,” adds PP&R Director Abbaté. “Developing this site will strengthen our platinum bike city status and extend our reputation as a city that wisely converts 20th century transportation space into 21st century gathering spots that provide and promote health and recreation opportunities.”

Developing Gateway Green was included as an Oregon Solutions project in 2009 and includes support from Governor Kitzhaber’s office.

“Today’s action by Portland City Council successfully transfers 25 acres of ODOT property to the city, for the creation of a world-class recreational facility,” said ODOT Region 1 Interim Region Manager Rian Windsheimer. “This important milestone follows years of work by the Friends of Gateway Green, ODOT, the Governor’s office and the City of Portland.”

The non-profit Friends of Gateway Green (FOGG) hopes to raise about $1.6 million by the end of 2015 to validate a Metro “Nature in Neighborhoods” grant. Donations may be made at http://www.gatewaygreenpdx.org/

In east Portland, two out of every five households do not have easy access to a City park. That is in stark contrast to the rest of Portland where four out of every five households live within a half-mile of a park or natural area. Constructing a new park on the land at Gateway Green will benefit an area that does not having ready access to parks or natural area. It will provide a much anticipated urban oasis for the community and enhanced wildlife habitat.

“This is a significant step in addressing historic inequities in parks in East Portland,” says Commissioner Amanda Fritz, who earlier this year also allocated System Development Charges (not tax dollars) to build two new parks in east Portland. Beech Park and Gateway Park & Plaza combined are more than 20 acres, and will serve more than 1800 families who currently do not have easy access to a park or natural area.

The acquisition of Gateway Green will add to that access. Its future as a regional off-road biking destination has the potential to transform the Gateway area and to encourage its growth. Gateway Green will become a desirable gathering space and to permanently stamp the larger Portland region on the map as a national destination for bicycling enthusiasts. It will strengthen Portland’s Platinum Bike City status in the spirit of when the City removed a highway to build Tom McCall Waterfront Park in the mid-1970s.

PP&R is fully participating in the Gateway Green project. In 2010, the City agreed to maintain most of the site, in collaboration with our partner, the Friends of Gateway Green. Portland Parks & Recreation is the first major financial contributor to the Friends’ effort, and will leverage that commitment towards further private and public investment in the project.