In 2010, PP&R Urban Forestry began the Tree Inventory Project to empower neighborhood groups to care for their urban canopy. Since then, 29 neighborhoods have partnered with Urban Forestry to inventory their street trees and create action-oriented management plans. Volunteers have identified, measured and mapped more than 100,000 trees so far!

Urban Forestry celebrates their accomplishments each year, and selects one volunteer in particular who has gone above and beyond to support the project. The recipient of this year’s Golden Diameter Tape Award honor is Louis Miles from the Hosford-Abernethy neighborhood. UF staff interviewed him to find out more about him and his love of trees. 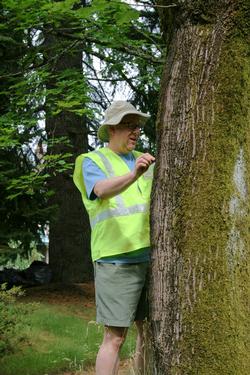 Lou first rented an apartment in Ladd’s Addition, and while walking to the bus to go to work each day, kept noticing a For Sale sign on a house.  He has lived in that house for the last 30 years, and moving into the neighborhood is where his interest began.

American elms were first planted in Ladd’s Addition in the 1910s and they unfortunately started becoming afflicted with Dutch Elm Disease (DED) in the early 1990s. Ladd’s Addition focused on preventing the spread of DED by starting the non-profit Save Our Elms. Save Our Elms began inoculating neighborhood elms to fight DED in the 1990s, and since 1997, its members have also planted 347 street trees to replace failing elms and other trees in poor condition. The neighborhood is now way ahead of most other Portland neighborhoods with 92% canopy cover! Save Our Elms next street tree planting is March 7, 2015, visit the Save Our Elms website for more information!

Q: What inspired you to work with trees?

Part of the draw to become part of the neighborhood is the beauty of the American elms lining both sides of the street. Lou liked the formal look that the uniform lines of elms gave the neighborhood, and he became invested in ensuring that this look was preserved. He saw that the elms needed care and became involved with Save Our Elms, a neighborhood group that inoculates trees against DED to preserve them for as long as possible.

Q: How do you benefit from volunteering?

Lou gets to know his neighbors because he goes door to door to see if they are interested in having a street tree planted adjacent to their property. Save Our Elms is also a fundraising organization that raises donations every year to inoculate elms and also purchase, plant and care for approved new trees. Homeowners only need to agree to the species of trees the group recommends, and the initial work is done for them. Trees bring the neighborhood closer together and are the glue that creates a unique bond in Ladd’s Addition.

Q: Can you tell us more about yourself?

Lou retired as a public defender for the State of Oregon, where he worked for 29 years. The first 7 years he commuted to downtown Portland, but in the last 22 years he was based in Salem.

It was a long commute but the fact that he was able to do some work at home was really helpful. He researched cases from trials and looked for errors in the rulings. Unfortunately he did not have the added benefit of attending the trials to observe all the clues gleaned from people’s body language. Needless to say, he knows the law extremely well and is good at analysis.

Lou also sings baritone every week in the Portland Gay Men’s Chorus. They have a holiday concert planned for December 5, 6 and 7. Their website is www.pdxgmc.org.

Q: What tree activities would you like to get involved with in the future?

Urban Forestry’s tree inventories and the neighborhood association Save Our Elms. Lou would like to contact landlords in Ladd’s Addition, an activity which has proved particularly challenging because many do not live in the neighborhood. It can be time consuming to successfully initiate contact with absentee owners.

Q: What are some favorite trees you discovered?

Q: What were some of your favorite tree events?

Lou likes being outside far better than being inside and likes to focus on walking in safe, friendly areas that are set up with sidewalks. His favorite areas are closer to downtown Portland where street trees are concentrated.

Q: Is there anything you would like other volunteers to know?

How much fun it is to inventory trees! It’s especially fun to find tree species that aren’t so common and then figure out what they are.

Q: Is there any way you think Urban Forestry can improve the program?

It’s very good, as is. Volunteers get to do fun stuff because Urban Forestry staff have done the leg work to ensure things are well run.