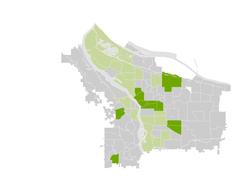 Seeking to empower residents to better care for their neighborhood’s tree canopy, PP&R Urban Forestry organized neighborhood stakeholders to conduct volunteer-led street tree inventories in Boise, Cully, Eliot, Foster-Powell, Kerns, Laurelhurst, South Tabor, Sullivan’s Gulch and West Portland Park in summer 2014. This was the most ambitious year yet for the project, and staff were pleased to see that the volunteer model held up to the increased volume! More than 280 volunteers donated 4,200 hours to the project measuring, identifying and mapping nearly 31,000 trees. In addition to collecting data in the field, volunteers entered all of the inventory data into ArcGIS at the Urban Forestry office.

Results, recommendations, and maps were compiled into individual neighborhood reports. Reports are available here. An interactive map is also available for searching the 100,000 trees in the database by address. Inventory highlights are listed below. 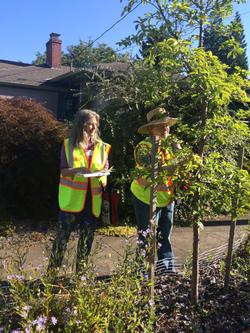 Composition: 131 tree types were found, ranging from 73 in West Portland Park to 102 in Cully. Tree counts range from 1,100 – 3,700 trees/neighborhood. The most common trees across all areas are Norway maple, red maple, cherry, and other maples. Deciduous broadleaf trees make up most of the tree population, but evergreens were present and ranged from 2% of the population in Boise to 36% in West Portland Park.

Stocking levels: In residential neighborhoods, stocking level ranges from 82% in Laurelhurst to 23% in Cully. Kerns represents the median stocking level, with 63% of its planting sites stocked. Almost 14,000 spaces have been identified for tree planting.

Undersized trees: About half or more of large planting sites in all neighborhoods are stocked with undersized trees. This ranges from 81% of all large sites in Boise to 48% in Foster-Powell and West Portland Park.

Planting site type: While improved rights-of-way comprise the vast majority (89% or more) of planting site types in most neighborhoods, they hold 60% of the trees in Cully and 86% in West Portland Park.

Planting site size: Large disparities were found amongst neighborhoods. Small sites, which support small form trees, range from a low of 0.1% of sites in West Portland Park up to 76% of sites in Boise. Planting site size corresponds to the mature size of a tree that can be supported in the site. 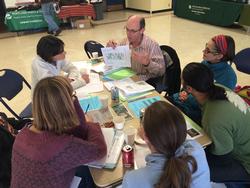 On November 8, 85 participants convened at the Tree Inventory Summit to discuss results and begin creating tree plans. After presentations on the data and hearing from several guest speakers on species diversity, canopy, Heritage Tree history and tree maintenance needs, participants broke into neighborhood groups to draft tree plans. The tree plans include a vision statement, goals, action items, and recommendations for property owners.

At the summit, Elizabeth and Danielle presented a menu of stewardship workshop options for participants to choose from, including planting, pruning, and maintenance events.

Urban Forestry staff will continue to work with tree teams to provide tree plan guidance and ongoing support. Staff is exploring how to best integrate tree plans into ongoing stewardship efforts, as well as expansion of the program. Urban Forestry has set the goal of completing the east side of the City in the next two years. Previously, staff conducted an analysis of neighborhoods so that future efforts can be prioritized in neighborhoods that are low canopy, low income, and racially diverse in order to align with the Urban Forestry Management Plan goals.

Applications for 2015 inventories are due January 15.

For more information about the project, or to download presentations, data and 2015 inventory applications, visit the Tree Inventory Project website.