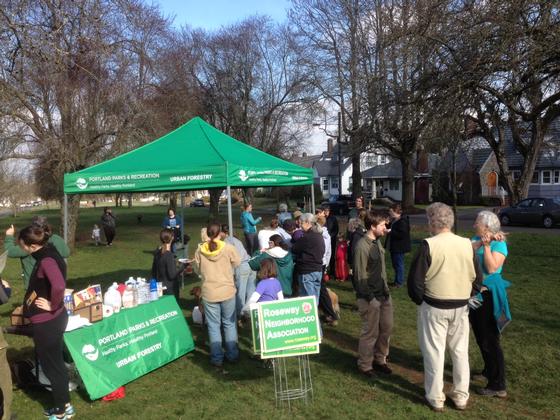 Urban Forestry is adding to the romance of Roseway’s 72nd Avenue park blocks with a Valentine’s Day tree planting. The planting will help the Roseway Neighborhood Association complete Phase One of a decade-long effort to rejuvenate and beautify the four blocks.  Some 19 trees purchased with money from the City’s Tree Planting and Preservation Fund will help fill gaps in a massive planting done back in 2003. That earlier planting was needed because row after row of identical clones of Thundercloud plum planted by civic boosters back in the 1950s were dying out. One of the drawbacks of that uniform planting of a single clone of plum is that all the trees die after about 50 years.

Neighborhood resident Sean Batty envisioned replacing the monoculture on 72nd Avenue with different species of longer-lived trees, namely chestnuts, oaks and hackberries. Supported by the City of Portland and Chad Honl from Friends of Trees, some 80 trees were planted on Nov. 15, 2003. About 75% of those trees survived to become established and are well on their way to becoming magnificent shade trees. The new planting is to fill gaps in the perimeter left by trees that were hit by cars or didn’t survive for one reason or another.

Because chestnuts and oaks have thrived in the park blocks, the new planting will showcase additional members of Fagaceae, a great family of 600 species that contains oaks, chestnuts and beeches among others. Not only will that add to the botanical education value of the blocks, but the new beeches, oaks and chestnuts will become large trees.  With potential lifespans well over a century, these trees’ spreading canopies will also provide Roseway with significant summer shade, cooling the air on hot summer days, absorbing road noise from nearby Sandy Boulevard , and prolonging the life of street pavement.

Batty has said of Phase One that “…the project demonstrates how citizens and bureau can work together to achieve great results.”  He already envisions a future Phase 2 that at each end of each block will combine the vibrant fall color of ginkgos and katsuras with spring-flowering trees set off by evergreen sequoias. The result will create a majestic local legacy for Roseway residents well into the next century. 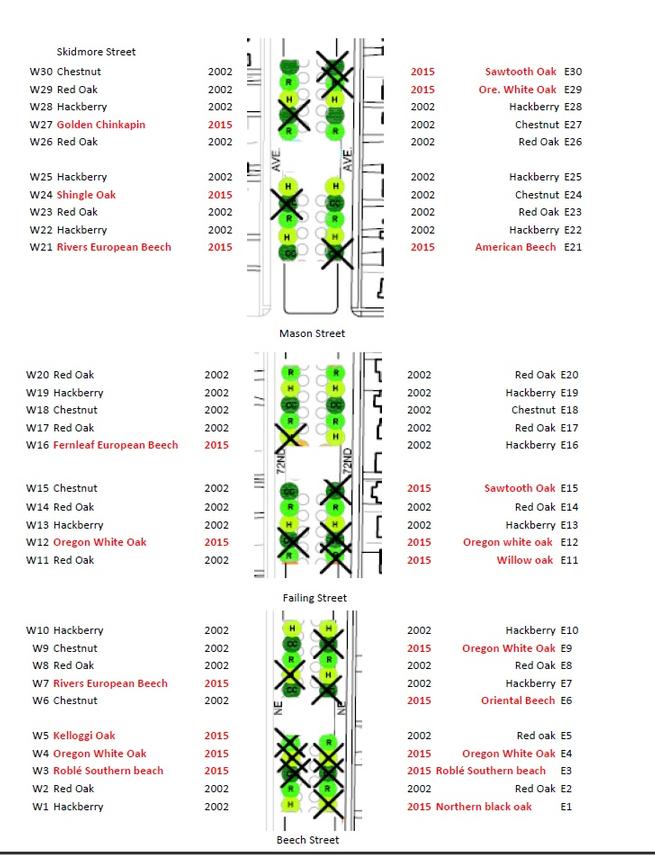 It's very good work for our environment . Can I join your community ?