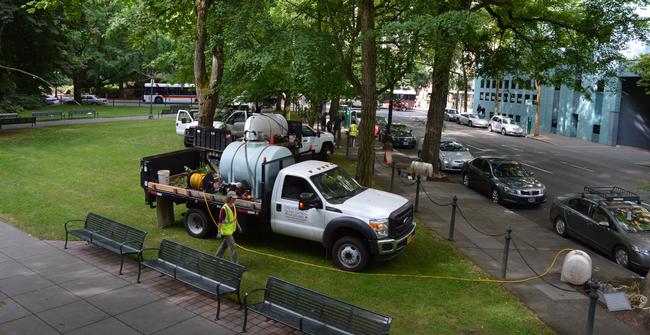 Following a particularly dry year, the City’s elms are hanging in there, but some are looking stressed. With sixteen elm samples currently being cultured in the lab and seven elm trees to be sampled, the true extent of Dutch elm disease this year remains to be seen.

With three major elm locations and several more individual Heritage elms receiving inoculations in June, elm inoculation season is off to a strong start. Despite this year’s high temperatures, the elms have proven to take up the inoculant more quickly and successfully than expected. Nineteen trees in

While Eastmoreland completed their elm inoculations mid-June, Save Our Elms’ inoculations in Ladd’s Addition are still pending.

Folks with any elm concerns or questions can contact Natasha Lipai, Urban Forestry’s Elm Monitor. Natasha can be reached at 503-823-8398 or at PKELM@PortlandOregon.gov with any elm/DED-related questions.