Trees are historic landmarks. This American Elm, Portland’s first historic landmark tree, is the last living connection to a neighborhood that was once full of homes and gardens. Rosetta Burrell, one of Portland’s socially minded women, planted it in her lush garden around 1875. Westshore magazine featured Mrs. Burrell’s home and garden in 1888-- a nineteenth-century "Lifestyles of the Rich and Famous" if you will. An active member of the First Unitarian Church and the League of Women Voters, Mrs. Burrell made many important social contributions to the city. In 1887, she was instrumental in founding the Portland Woman’s Union, and donated $10,000 of her own money to build the Martha Washington Hotel: a boarding house for single mothers that also provided educational training. Over the years the Burrell’s suburban home became part of the downtown core. The gardens, greenhouses, and stables were cleared to make room for more dense development. By 1973, all that remained of the Burrell’s property was the elm tree. That year, a member of the Oregon Historical Society had an idea: If the city of Portland could preserve historic buildings, why not a historic tree? So in 1975 the city’s Historical Landmarks Commission approved the Burrell Elm as the first landmark tree in the city. As a historic landmark, it’s no surprise that this tree was first on the list when the city created the Heritage Tree ordinance in 1993. Now legally protected, any construction or development that could affect the tree requires approval of the City Forester. 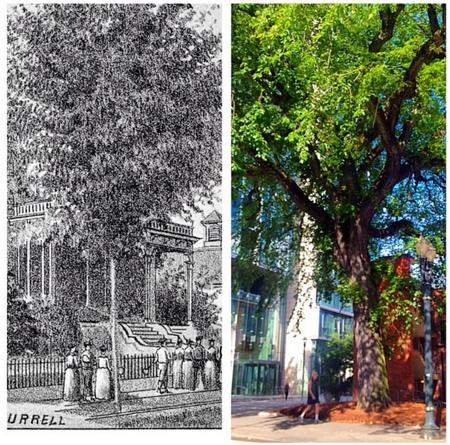 The Burrell elm is indeed an historic tree and the pride of Portland, with roots extending back over 140 years. As Portland’s landmark historic tree, it certainly has deserved and has received protection. The developer of the high-rise condominium (in which I live) immediately to the south of the tree was required to specially design the northeast corner of the two-level underground parking garage. Each level has a quarter-circle curved concrete wall extending into the parking area in order to avoid and protect the elm’s large root ball.

The historic elm’s trunk and the majority of its large root ball are within the plat of the property holding the YWCA building. The current owner of the building and property is developing plans for the site which may include the destruction of the building and replacing it with a high-rise building (residential/commercial). If so, the elm will be at risk during YWCA building destruction and construction of the new building. Additionally, the new building must give the root ball and the large overarching limbs adequate lateral space and breathing room. The City Forester will no doubt ensure that the tree is protected during development of the site. However, this tree deserves very special protection. The penalty for inadvertently killing the tree may not match its real historic worth to the citizens of Portland. To sharpen the developer’s focus and attention to preservation of the tree, a six-figure sum should be required and placed in escrow before the Bureau of Development Services issues a building permit. If the tree survives for two years after completion of the building, the amount in escrow would be returned the developer.

The Burrell elm is a source of joy to me and many others every day, summer and winter, spring and fall. Without it, I know my own life would be diminished, and I'm grateful for living in a structure that was designed to protect the tree, as Bob Wright explains above. Over the past few years, our neighborhood has lost a number of magnificent trees, mostly due to storms and sometimes disease--traumatic events, even when caused by natural forces. It's a nightmare to think of Rosetta Burrell's elm being damaged through human carelessness or intervention, and I agree with Bob's suggestion of how such a misstep might be prevented.

I am a (non-touring) member of Urban Tour Group. They specialize in taking 3rd graders on tours. (that is when they study "The City.They also tour adult groups for a fee(about $15 per person) in the summer (the fee helps cover bus transportation fees for the school children). I will notify them about the possibility of the tree's removal (they have a monthly meeting).They may wish to sign a petition .Anyone else who belongs to a club could do the same.

I think that Robert Wright's suggestion is worthy of pursuit. We could have a petition for residents to sign( in the lobby perhaps) and present it to the City (Bureau of Development Services).